Posted by Roger Wang on 10/10/2018 to News
We're of the belief not everything can be made better by being larger, taller or longer.  We have certainly made the case and aptly demonstrated this with several of Forward Controls designed products, such as LDFA, EMR, and ABC/R.  In key areas, these products have reduced footprint to mitigate interference.
LDFA is rimless to make it ambi charging handle friendly.
EMR's height is no taller than the TDP spec magazine release button, and has no accidental/unintended magazine drop risks.
ABC/R's lower paddle has roughly 2.5x the surface area of a TDP spec bolt catch, it's vertically increased, and doesn't interfere with ambi mag catch operations.
Today we'll look at the charging handle, specifically, its latch.  In the early 2000s, the trend was to make the latch larger to access, the belief was with a variable power scope and its large objective lens, a larger latch would allow the user to access the charging handle more easily.  The trend unfortunately has continued to this date.
A larger latch promotes more torque to be applied (mechanical advantage), unless the latch itself and the latch pin are both reinforced, the latch will break more easily.  TDP spec charging handle's latch almost completely recesses into the T handle, the roll pin bears very little load, as the T handle does that.  Swap out the small latch with an oversized one, the dynamics will change, the larger latch "bottoms out" against the T handle and places load on the latch pin and the latch.
Oversized and broken, one should expect nothing less from this particular company that makes this. 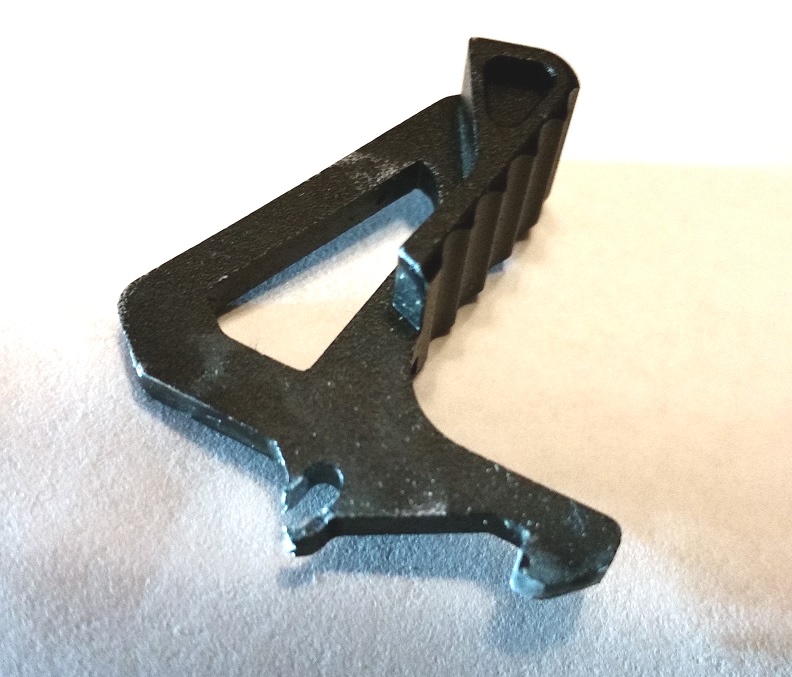 Another problem with a larger latch is it unwittingly promotes torquing the charging handle to the side, instead of straight back.
The recent development of charging handles with the latch and handle built as one can have both of these issues mentioned above, though most of them have coil pins and properly designed latch/handle, it's rare to see them break.  A larger moving handle still has the torque-to-the-side side effect.
Lastly, an oversized handle on an ambi charging handle does not clear the forward assist, specifically, its rim (unless you have an A2 "tear drop" forward assist, or our LDFA).  A smaller latch means the user's finger will be far closer to the charging handle's center, which puts it  on a path out the of the way of the forward assist's rim as the user pulls the charging handle using its right latch.  This part appears to be little understood and realized.
As we're fond of saying, oversizing something is a sign of the designer being lazy and lacking in imagination.  There's a balance in any system, it is unwise to oversize a part, make it heavier, or for that matter, undersize a part, or make it lighter.  Actions have consequences.  There are better ways to solve a problem, assuming the problem actually exists.
As we will shortly demonstrate with ACF in late 2018 or early 2019.
Previous Post
Next Post
Quick View