Posted by Roger Wang on 8/30/2017
As some of you know, my professional education and training is in LAN/WAN networking and design.  As a network systems engineer, one looks for conflicts a host or equipment may introduce, and its footprint on the network, among about a dozen or more constraints

It is only natural that Forward Controls designed components also go through similar considerations.

Most of our designs incorporate the Contention Avoidance concept.  The introduction of a new and different component often imposes incompatibility, or results in poor ergonomics on its neighboring part, contention avoidance deconflicts these unintended interferences.

1. Creation of ample clearance and space between two adjacent control surfaces to mitigate their close proximity.  When two control surfaces are very near to each other, using either becomes less intuitive and more time consuming, as the user needs to determine the identity of the button/lever and distinguish it from the other, sometimes with a visual that's not always possible in low/no light conditions.

2. Elimination of excess height, diameter, length, or thickness of a component when it creates conflicts with another component.  Less is definitely is more here.

3. Use of MCS (Multt-faceted Control Surface) to channel the user's hand or finger to where it's needed and most effective, and away from areas where it's not needed and least effective. MCS is a design language that makes use of various heights, angles, lengths and thickness to create ergonomic control surfaces.

Example of Contention Avoidance and MCS:

The above picture shows both the EMR-A and ABC/R v2.
Notice the EMR-A lever's height is at its lowest blow the bolt catch's lower paddle.  This is done to mitigate interference of one control surface with another.  Also notice the EMR-A lever isn't serrated all the way along its length.  Serrations only start where the user's finger pad can exert meaningful pressure, while serrations are completely absent below the bolt catch.  This is done to channel the user's finger away from the potential interference zone, and to the serrated portion where it belongs.

Another example of Contention Avoidance at work:

The above picture shows a Geissele Airborne Charging Handle and Forward Controls LDFA (low drag forward assist).  LDFA has a patented rimless design.  Forward assist is often a controversial control, we don't debate whether it's needed, but like it or not, it's on many standard upper receivers.  When an ambi charging handle is present, and the user uses the right latch to pull the charging handle back, the original A2 round FA's rim catches on his fingernail or knuckle.  The elimination of the FA's rim means the user's right fingernail or knuckle now glides over the LDFA, instead of being snagged by a rim.  Being the FA is not an often used control, it can afford to be reduced in size.

In varying extents, education and training in one career always seems to find its way to another.  For LAN/WAN or combat rifle parts, our version of KISS (keep it simple, smart) makes a lot of sense. 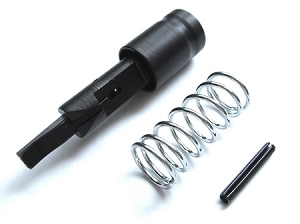