Posted by Roger Wang on 7/31/2022
Early M16's 3 prong, open ended flash suppressor was replaced by the A1, 8 port, close ended flash suppressor in 1967.  The 5 port, closed bottom, close ended A2 replaced the A1 in 1983.
We've done a fair share of muzzle devices testing and research during, and after 6315 development and production.  We concluded then as we have continued to  believe, from a practicality and functionality perspective, a closed bottom design is a superior design. 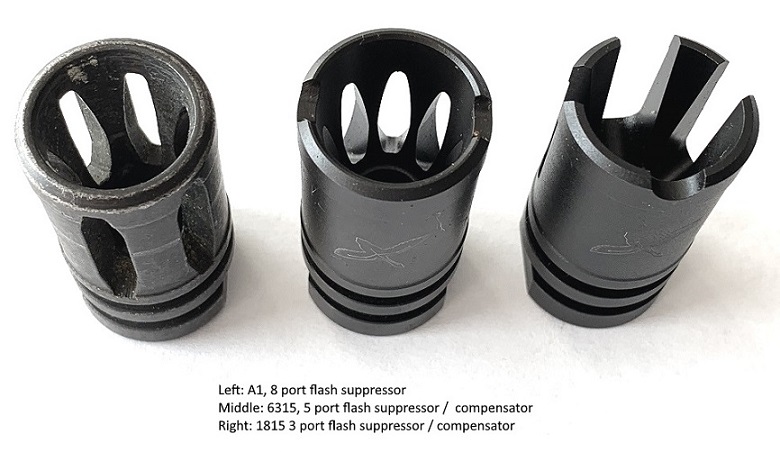 To be sure, no muzzle device is perfect. They're all compromises, it's a matter of which features/capabilities the designer deems more important than others to incorporate into the design.  It is interesting to see the design choices from various manufacturers that often reflect on their mission.
A purpose designed and built flash suppressor can successfully suppress flash signature from a 10.5" barrel, but it's usually longer, and often has an open ended design that's not as robust as a close ended one. A compensator depresses the muzzle to compensator for muzzle rise, but has unacceptable compromises in the way of increased flash signature, concussion and noise.    A1 and A2 suppress flash signature reasonably well, and is short and robust, but can't compete with longer, open ended flash suppressors that focuses mainly on elimination of flash.
A closed bottom muzzle device functions as, and is a muzzle rise compensator, gas existing the muzzle is channeled upward to depress the muzzle. A2 (other closed bottom muzzle devices, and 6315 by extension) isn't a pure compensator, the idea of one compensator for all barrel lengths, gas ports, buffer weights, etc. is a fool's errand and invariably results in its performance being affected by variables, it may be over-compensating for some, while working reasonably well for others.  A2 compensator and 6315 are foremost a flash suppressors, with muzzle rise compensation capabilities as a secondary consideration.  Muzzle rise compensation at the expense of increased flash signature, concussion and noise is wholly unnecessary for a 223 caliber rifle, there is no point in addressing a non-existing and perceived problem, especially given the consequences.
An important function provided by a closed bottom muzzle device is dust signature mitigation.  The shockwave created as the round exits a closed bottom muzzle is sufficient to stir up a bit of dust while shooting in a kneeling position, and more so in prone but both are negligible.  With a muzzle device that has ports all around and directs gas downward, the dust can be severe enough to obscure the shooter's view of his target, while simultaneously creating telltale cloud of dust that gives away the his position. If  the environment in which you use your rifle is duty or defense and your target shoots back, this should be more than a minor annoyance.  Paper targets don't shoot back, they don't have opposable thumbs and can't hold a gun.
This still frame is from Smarter Everyday on YouTube https://youtu.be/IAR4yTYslkk
Left is from a sound suppressor, right is from a flash suppressor.

If the primary use of your rifle is competition and recreational shooting, muzzle device selection may not warrant the kind of scrutiny we place on duty/defense rifles.  Few police departments choose to use a brake or compensator for their impracticality when shooting from inside confined space or a vehicle, both are obnoxious even when used outdoor. Flash suppressors are far more practical and they don't have the undesired consequences of using a brake or compensator.
A closed bottom flash suppressor is a blended capability muzzle device that to us, encompasses all the features we want on a duty/defense rifle, all in a package 1.8" long:
* Flash signature suppression
* Muzzle rise compensation without incurring obnoxious flash, concussion and noise
* Dust signature mitigation when shooting from kneeling and prone positions
Your experience will probably not vary.
Next Post
Quick View