How much is too much, or do I have enough?

Newton (n) unit of measure denoting the amount of force required to bring one kilogram to a velocity of 1 meter per second squared.

a.    ft./lbs. (n) foot pounds, the amount of force required for rotation as measured in pounds per one-foot arm.

Static strength (n) force applied on a system which remains in the position in which it was placed until the system fails, this force is applied in an even measured pace.

Dynamic Strength (n) force applied on a system which a spike of force is applied in a sudden unidirectional pace.

Tensile stress (n) a force directed on a longitudinal plane.

Shear (n) deformation of a material when on plane passes another in a parallel manner.

Ultimate (Total) strength (n) the point of failure in which a sub-component of the threaded assembly fails, this can be determined either statically or dynamically

Basic pitch diameter (n) the diameter of an imaginary cylinder or cone, the surface of which would pass through the thread points at such a point that would make the width of the thread equal to half the pitch. [see figure 1]

Yield point (n) stress beyond the point the ability to return to the objects pre-described characteristic, naturally. Generally, this applies to ceramics and plastics. 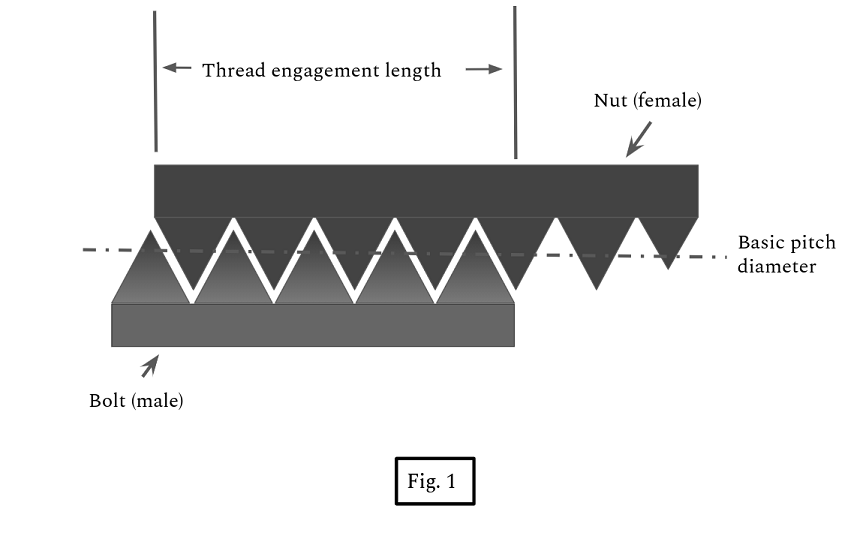 Analyzing threaded assemblies is often overlooked by those who have not done the research and development, like that of a third-party equipment manufacturer who is not privy to the original design specifications. In addition, often the calculations themselves can appear confusing, convoluted, and cloudy to those who do not work in the scientific realm. However, without this analysis, critical failures may occur due to incompatible materials subjected to forces beyond the limits of load bearing. Screws may either back out due to a coarse thread, or, due to the forces of friction, strip the tooltip, and or cross-thread. This leads to frustration and potential damage of either the male or female, which, depending on the context may ruin the entire goal of the joining (i.e., stripping out the internal threads on a serialized firearm frame).

For the practical purposes only the scenario of an electronic pistol sight affixed to a reciprocating firearm slide. The terms ‘male’ and ‘female’ used within denote only the threading location, in common vernacular, and have no other intrinsic or stated value.

Three points of failure present themselves in the optic-slide assembly (1):

Length as well as material composition plays an important role in determination of minimum thread engagement with regards to threaded assemblies, as can be seen with Equation 1.

Minimum thread engagement can be calculated by determining the yield points of both materials of the male and female portions, as well as the total strength of the male threaded assembly.  These can often be found in tables online and are generally given in mega Pascals. The sectional stress area can be determined by the cross section of the male portion given in area. The nominal diameter of the male portion is also called the tapped hole diameter, whereas the pitch diameter includes that of the pitch, which would include splitting the difference between the area of intersection between the male and female portion, see figure 1. Pitch diameter can be determined by multiplying the diameter times 0.6495.  For example, an 18-8 stainless steel screw with a female portion of 1018 mild carbon steel, with the screw approximately M3.5x0.6 whose cross section is 3.5 mm.

Therefore, the minimum thread engagement between both the male and female portions of the threaded assembly, not including the third piece should be greater than or equal to 8.98 mm to reduce the potential for the aforementioned failure points in the assembly itself.

It is to be noted, that the threaded assembly should for all intents and purposes be as close to one solid piece without compromising integrity. That is, it should be right and tight.

Generally speaking, the force emplaced by the round exciting the barrel is negligible as compared to the ultimate strength of the threaded engagement as denoted above. When converting from millimeters to inches, divide by 25.4.  Thus, for maximum use of the material, especially when designing an assembly, nearly 4 hundredths of an inch would be needed.  However, as stated above, most of the options on the market meet the strength requirements in terms of ultimate strength which leaves the question of ‘How many turns of the thread do I need to ensure that I have enough?’. Speaking again in generalities, you should have enough thread tension that the load doesn’t move under force.  This, however, does not answer the question first posed.

If we take the average recoil of a standard government issue 5” 1911, the impulse of the slide assembly has 9.5 newton-meters. Remember that a Pascal is 1 newton over a square meter. The slide assembly has a trajectory, whereas the ultimate strength is measured in pressure from all sides. However, we can compare them on a somewhat limited basis in order to determine with some mathematical certainty an answer to our question.  It is worth noting here in this analogue we are only interested in the lower of the two values given above, that is to say the yield point.  This figure is in megapascals, equivalent 3.1 x 10^8 or 310 million, and our impulse force is 9.5 x 10^1. As the denominator becomes larger and larger, the fractional amount becomes smaller and smaller.  Effectively, since this number is so near zero, we can then focus on second half of the male equation. This gives us a value of around 4.5 mm, or in inches, 0.1768”. This would be larger than most plates available to thread into, so we need to again look at that factor that we looked past earlier. If we take that use that rough analogue, as we stated earlier, since we are comparing apples and oranges here, but hang with me here for a second…as I mentioned earlier as that number approaches zero, to multiplicity of it drags the second half of the equation closer to zero as well. Thus, we end up with an analogues value of 0.00016” or 1.6 thousandths of an inch. If the screw has bite, and is tight there is little chance, granting that of a manufacturing defect, that the assembly will fail based on the calculations and rough analogues we have drawn today. But that is not to say that it can’t ever happen.

There is still a potential for shear and lose of the load (i.e., the optic) due to imperfections in the manufacturing process as well as natural homogenous boundaries of various components of the steel. Generally, one thinks of a composite material, like steels, plastics, and other amalgamations as perfect crystalline structures.  This would be a mistake, for they appear more as various conglomerations and mixtures of the underlying substances.  To account for this in calculations would be impossible to overcome, as each individual composite material cannot be matched to each other, much like how no two snowflakes are alike. Generally speaking, an added ‘fudge’ factor is given to ensure that designed threaded assembly acts in a suitable manner.  Redundancies are usually also added to ensure that if a portion of the assembly fails, the load is not cut way and satisfactory performance can still be ensured. Further additions to the equation can be added, but usually they are factored out by the so called ‘fudge’ factor or in rounding, and therefore do not play any additional practical use for calculating.

When taking these considerations into account with the selection of composite material in design or selecting from the many ‘off-the-shelf’ solutions, it remains important to take both the structural composition as well as any redundancies that may or may not be present.  In the end, a little math, with and eye towards potential common failure points, frustration and financial loss can be avoided.

M.M. Martinez, D.Z. Rios, “An Empirical Model to Calculate the Threads Stripping of a Bolt Installed in a Tapped Part” World Academy of Science, Engineering and Technology, 46, 2008

Thread engagement in mounting optics How much is too much, or do I have enough?
Previous Post
Next Post
Quick View