Posted by Roger Wang on 11/13/2018 to News
TDP castle nut has three staking notches, equally spaced, of 0.084 width +0.02/-0.00 tolerance, at 45 degree angle. There's no debate as to what these notches are for, castle nuts should be properly torqued (38-42 ft/lb), and staked in two places.  Despite experience and lessons learned from LE armorers and users, some still do not believe it's necessary to stake the castle nut.
Military carbines are delivered with their castle nut staked.  It is insufficient to rely on friction alone to ensure the castle nut's immobility, lest it should rotate, and in turn, allow the receiver extension to rotate and spill the buffer retention pin and its spring  into the receiver. 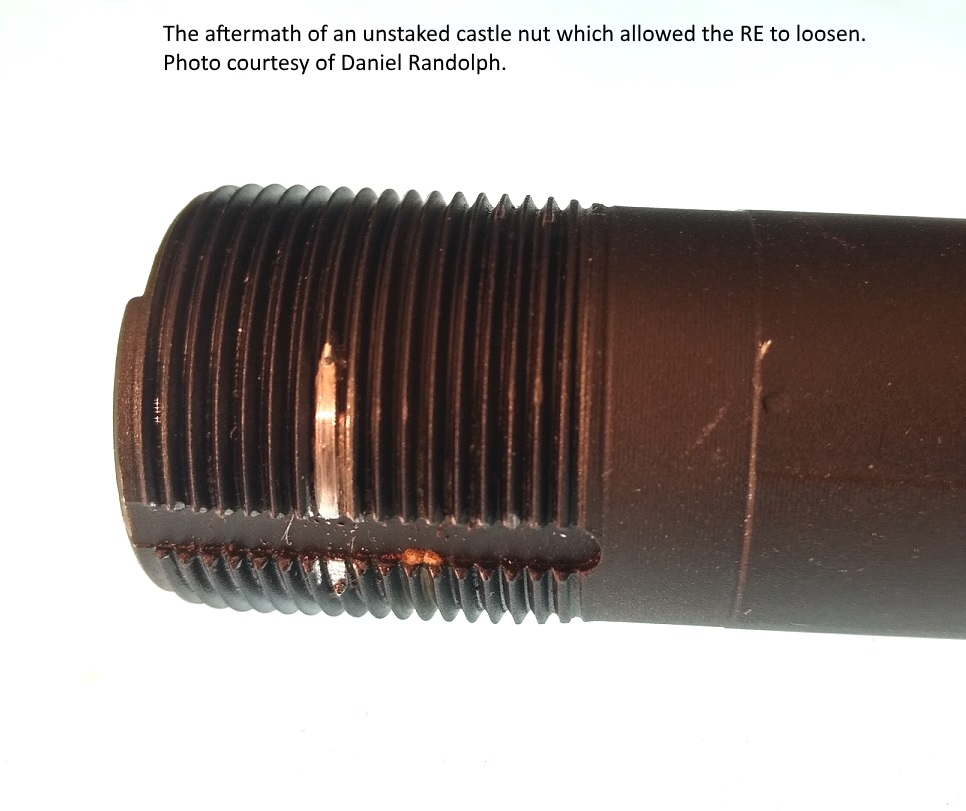 So far as we can tell, the "stakable" locking ring was introduced by Colt in the mid 1980s with M16A2. The old CAR style locking ring didn't have staking notches.  Considering the AR's buffer and buffer spring are contained within the receiver extension, it's of understandable importance that the receiver extension doesn't unduly rotate and loosen, which would lead to the buffer retaining pin and buffer retaining pin spring being released into the lower receiver, this invariably results in the trigger or hammer being jammed.
Staking the castle nut is the operation where material is moved from the end plate into the castle nut's staking notches with a mallet and punch, rendering the castle nut immobile.  Staking the castle nut in two places is specifically referenced in the technical manual (pg 250).  A staked castle nut is not impossible to undo, it is exceedingly difficult to loosen without an armorer's wrench, or a castle nut wrench, as it should be.
Staking can be performed using a center punch, or an auto center punch.  The punch recommended by the AR guru William Larson is the Mayhew 5/32 center punch.  It is free insurance against loosened castle nut and receiver extension.
While we're at a loss as to the reluctance of users to do it, more puzzling and unsettling is the trend for manufacturers to market castle nuts and end plates that cannot be staked, instead, these products either use a set screw or friction alone, it is our opinion neither should be considered for hard use.  We're not sure of the wisdom of deliberately going against the written instructions in the TM, and best practice long established by Colt and FN.  The notable exception is Knight's Armament's end plate sling adapter.  According to KAC (we're paraphrasing here),  the mating surface of its end plate and the indentation on the rear of the KAC receiver is sufficiently precise to have little to no movement, which doesn't allow the receiver extension to rotate to loosen, there is no need to stake KAC's end plate/sling adapter.
Our opinion is if your AR is for sporting and recreational purpose, you may have more tolerance for improper or total absence of staking, a loosened castle nut and RE may ruin your day, it won't cost you more than minor inconvenience.  If you have a defense or duty AR, be sure your castle nut is in spec, properly torqued and staked in two places, it may well mean the difference of life and death, not something one should take lightly.
Previous Post
Next Post
Quick View